Recently my husband and I had the rare opportunity to get away for a quick overnight trip to Charlottesville, sans kids. Of course I wanted to pack in the wine and beer tastings, so we started out at Jefferson Vineyards.  The tasting, $10 per person with a complimentary glass to take home, featured dry and semi-dry white and red wines, including their Petit Manseng (my favorite) and Vin Blanc. The surrounding countryside made for a laid-back, relaxing visit. 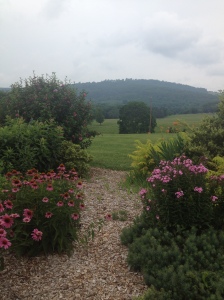 Keswick Vineyards, about 20 minutes away, was our next stop. Home of the fanciest porta-potty I’ve ever seen, this rural winery has a small tasting room and a large outdoor patio. Keswick offers a wine club, with one of the wines on the tasting list coming from a friendly wine blending competition between wine club members. In addition, the vineyard features several varieties of wines made from California-grown grapes, but blended and bottled in Virginia (Vent d’Anges series). The Trevilian White and the Norton were my two favorites.

After two wineries, we switched to beer, heading for Starr Hill Brewery. The industrial building, once home to a Con-Agra foods plant, now houses a tasting room, brewery and storehouse. The brewery offers two different tastings.  The Classic Setlist features Starr Pils, The Love wheat beer, Grateful pale ale, Northern Lights India pale ale and Smoke Out German smoke beer (a substitute for the Monticello Reserve colonial-style ale, which was out when we visited). The Backstage Pass, which I ordered, has Soul Shine Belgian-style pale ale, Reviver red IPA, King of Hop Imperial India pale ale, Red Rooster coffee cream stout and a Debut of Cherry Witbier. The standouts of my tasting were the Red Rooster coffee cream stout (I’m a fan of stouts and dark beers) and the Revier red IPA. My husband, a pilsner and light beer fan, liked the Starr Pils and Grateful pale ale. Word to the wise: skip the Smoke Out German smoke beer. It tastes like regular light beer with liquid smoke added! 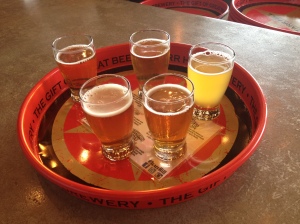 The last stop on our list, Three Notch’d Brewing Company, is located in downtown Charlottesville. There, we got to try an even bigger variety of beers. I tried the Brew Betties Maibock, a special brew made in conjunction with Charlottesville’s all-girl beer club, Hallowed Be Thy Ale, and old-English style ale made as a tribute to Iron Maiden, Peaches and ‘Reen IPA with peach, Jack’s Java espresso stout, “No Veto” English brown ale, “Session 42” English ale and “Notch’d Your Everyday Hefe” Hefeweizen. Three Notch’d is really doing some creative things with brewing. In addition to the beers above, the brewery has experimented with a rye-PA, a smoked barleywine, a sugarcane and pecan ale and even a Buffalo Trace bourbon barrel-aged Imperial oatmeal stout. My favorites of the beers I tried were the Jack’s Java espresso stout and the Hallowed Be Thy Ale. Three Notch’d’s 40 Mile IPA, one of their flagship beers, pays tribute to Jack Jouett, the Paul Revere of the South, who rode 40 miles to warn Thomas Jefferson that the British cavalry was approaching. 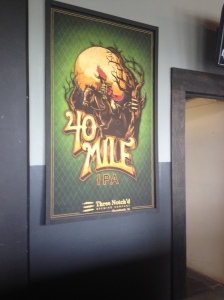 We had such a great time visiting the vineyards and breweries around Charlottesville that we can’t wait to do it again with different stops!