“I saw the ghost of Elvis on Union Avenue.

Followed him up to the gates of Graceland, and I watched him walk right through.”

As the National Pork Board‘s “Pork Passion Pursuits” sweepstakes winner, my mission in Memphis was to soak up the local culture and to learn about the prevalence of pork barbecue in this city by the Mississippi River.  Friday morning, my husband and I had a quick breakfast at our hotel, then set out to explore the city.  We drove to the South side of town to check out an old, abandoned brewery from the late 1800’s that sits on the bluff high atop the river, then we walked down to the riverside to check out the view of the city. 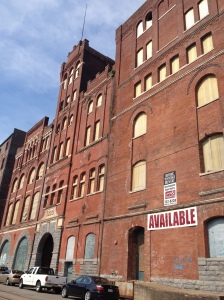 After our quick trip down to the river, we headed for Graceland.  In the classic movie “Pulp Fiction,” Uma Thurman’s Mia Wallace tells John Travolta’s Vincent Vega “For instance, there are only two kinds of people in the world, Beatles people and Elvis people. Now Beatles people can like Elvis and Elvis people can like the Beatles, but nobody likes them both equally. Somewhere you have to make a choice. And that choice tells you who you are.”  My husband and I are polar opposites in many ways, so it should come as no surprise that, while I’m a die-hard Beatles person, he, on the other hand, is a self-professed Elvis person.  Our trip to Graceland was one of the things he was most looking forward to on our trip.

The first thing I noticed about Elvis’ home was that it is definitely big business.  There’s a fee to park in the huge lot adjacent to the ticketing/exhibit complex, and each of the exhibits exited, predictably, through a gift shop.  The home itself is across Elvis Presley Boulevard from the ticketing/exhibit complex, and a shuttle bus ferries visitors back and forth.  I was surprised at how small the house was – I guess I’d always assumed that Elvis – you know, the King – would have a massive home, but it’s really more of a large home than a mansion.  Of course, coming from poverty like he did, I’m sure the house was enormous to Elvis and his family.  I also had not been aware that Graceland was an historic home built in the 1930’s, and that Elvis bought it rather than having a house built. 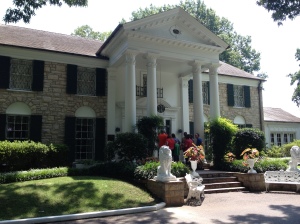 The home is in remarkable shape, and has been preserved just as it was when Elvis passed away in 1977.  In fact, the house is so well-preserved that you can almost imagine the man himself rounding the top of the steps and coming down to greet you.  The decor is decidedly seventies and just a bit tacky, especially in the areas of the house where Elvis spent most of his time, such as his basement tv and pool rooms and the infamous Jungle Room.  Despite the initial gaudiness, however, you soon realize that everything at Graceland was completely state-of-the-art when Elvis was alive, down to the triple tv’s in his tv room. 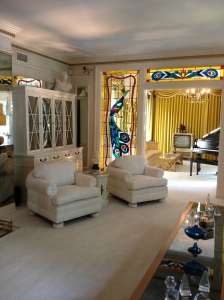 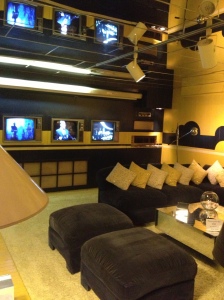 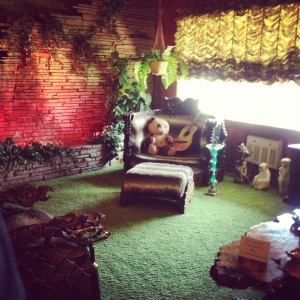 After our tour of the house itself, we were led through the outbuildings, including several that have been converted to house Elvis memorabilia, such as his gold records, awards and various costumes he wore throughout the years.  The path through the outbuildings describes the history of his career, from the 1950’s through the 60’s and 70’s – his first hits to his comeback special to his residency in Las Vegas.  By the end of the tour, you arrive at the gravesite of Elvis, his parents and other family members.  The Meditation Garden was built by Elvis when he was alive, and it is his final resting place.  I was surprised by how moving the whole experience was.  Elvis was truly a great musician, and his legacy of bringing blues and country music to the mainstream music industry has profoundly influenced so many other artists.  Even my beloved John Lennon once said, “Before Elvis, there was nothing.” 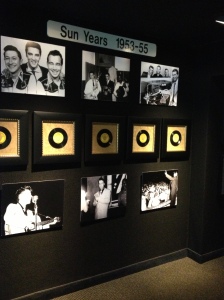 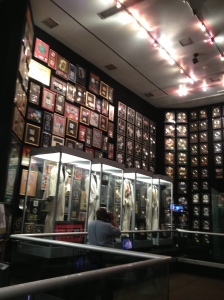 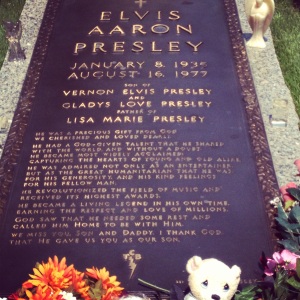 After we crossed back over Elvis Presley Boulevard in the shuttle bus, we were free to visit the other exhibits included in our Premium ticket:  Elvis’ Automobile Museum, his private planes and a small exhibit chronicling his run in Las Vegas.  My husband is a gearhead, so he loved the chance to see some cars and motorcycles from Elvis’ collection.  The pink Cadillac he bought for his mother was the star attraction.  The planes were cool too, especially Elvis’ custom jet plane with his very own bed, outfitted in blue suede sheets – of course! 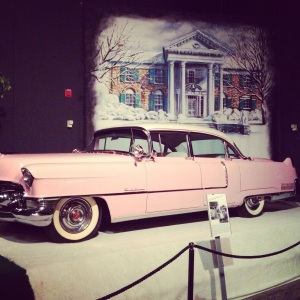 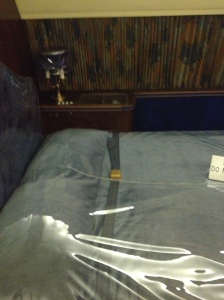 After we finished visiting all the different exhibits and gift shops, my husband and I were starving.  What better place to stop for lunch than the barbecue restaurant down the street that The King himself used to frequent?  We made our way to Marlowe’s Ribs & Restaurant and settled into a weathered booth.  Like Graceland itself, Marlowe’s appears to be stuck in the 70’s.  The decor is vintage, and the walls are covered in Elvis memorabilia, articles and photos.  As with every barbecue joint in Memphis, Marlowe’s has a gift shop where it sells its own dry rub and bottled barbecue sauce.  We both got the pulled pork sandwich, which came with cole slaw and fries.  One bite and I could tell why Marlowe’s pulled pork has won award after award – the meat was perfectly smoked and sauced, and it was thick and juicy.  I was in pork heaven! 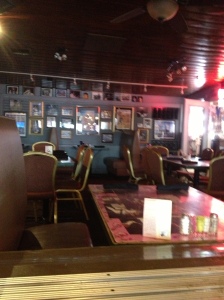 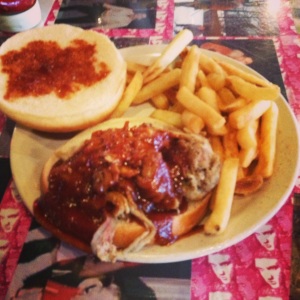 After such a huge meal, we headed back to the hotel for a rest, and to check out our plans for the next few days.  Our hotel, the Hampton Inn Beale Street, had an indoor pool and hot tub, so we hung out there for awhile before deciding to head to Mud Island Park for a run.  The park runs alongside the Mississippi River, and the views of the river are gorgeous, not to mention the views of the massive and stylish homes that line the bluff atop the river.  We jogged along, watching the sun set over the Mississippi, then headed to grab a quick dinner of salads from Arby’s.  All the traveling, walking and jogging must have done us in, because we ended up tucking in early on Friday, ready for a busy Saturday in Memphis! 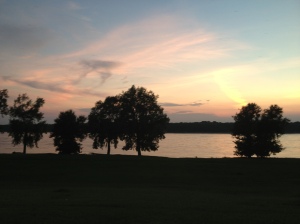