A while back, when I first heard about Anthony Bourdain’s planned indoor market in New York, I was intrigued.  The concept of an indoor market/food hall dates nearly as far back in time as the concept of trade in food and spices itself, and most foodies can attest that the first and best place to visit in a new city to find out about its food culture is its local food market. Bourdain’s market, slated for Pier 57 in Chelsea, will feature heavy Asian influences, drawing from markets like Hong Kong’s Temple Street Night Market and Sapporo’s Ramen Alley. It’s already on my foodie bucket list, even though it won’t be open until at least 2017.

Apparently, other celebrity chefs want to get in on the market action too. Enter Mike Isabella of Top Chef fame, owner and restauranteur of Italian-concept Graffiato and Greek concept Kapnos, among others. Isabella is getting in the food hall game with a planned eatery in Tyson’s Corner that will showcase 10 different concepts, from Graffiato’s Italian small plates to Kapnos’ spit-roasting Greek fare, and adding Mexican cantina Pepita, Japanese/Korean restaurant Yona, a raw bar, Spanish tapas, coffee, ice cream and more.

Up and down the East Coast, the food hall concept is the hottest innovation in food retail. While many cities are hanging onto a proud food market history, such as Lancaster, Pennsylvania, home to the nation’s oldest continually-operating indoor food market, other cities are re-imagining the food emporium in the image of today’s in-the-know foodies. Atlanta’s Ponce City Market is home to concepts from James Beard award winners like Sean Brock, while Tampa’s Sundial shopping and dining complex boasts chef Michael Mina’s food market and restaurant, along with potential tenants like Masaharu Morimoto and Emeril Lagasse.

Here’s hoping the food hall trend will make its way to Richmond – perhaps in the guise of the new and improved 17th Street Farmer’s Market! 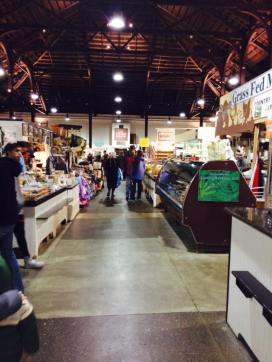