My husband and I recently took off to Miami and West Palm Beach, Florida for a quick pre-holiday weekend getaway. When we were planning what to see and do, I relied heavily on Yelp to guide us to some unique and fun locations, and Yelp did not disappoint!

When I use Yelp, I don’t necessarily just search for “restaurants” or “bars.” I tend to use more search terms like “Cuban jazz” to pull up places known for specific things. Yelp told me that a club called Ball & Chain was the place to go. On the night we visited, a Thursday, there was a three-piece jazz group performing in the outdoor courtyard at the back of the club. The atmosphere was relaxed and elegant. The courtyard had couches and chairs and an outdoor bar. We grabbed some drinks and checked out the band, which was actually playing on a bandstand that was designed to look like a giant pineapple!

After that band finished their set, we moved inside to the large, open main room. The club dates from the early 1930’s, and throughout its history it has hosted interesting personalities – from local criminals and their business associates to black musicians and performers in the 1940’s and 1950’s in the pre-Civil Rights-era South, including Billie Holiday and Count Basie. In the late 1950’s, the neighborhood surrounding the club became a Cuban enclave, as Cubans fleeing the political upheaval in their homeland came to the U.S. By the late 1960’s, the location had transitioned to a furniture store, then later sat vacant for years before being purchased by a local real estate investment group. After extensive renovations, Ball & Chain reopened as what it had originally been intended to be – a nightclub offering the best in live music. 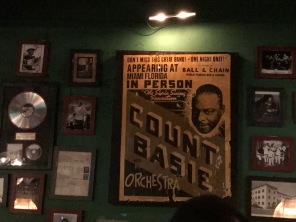 Inside, after a rather interesting performance ON THE BAR TOP involving a scantily-clad woman and a gentleman in a three-piece suit – sparklers and confetti were involved – another band set up in the front corner of the bar. A raucous salsa dancing party ensued, with amazing afro-Cuban music and old-timers stepping in to soft-shoe for a few steps. It was an authentic Little Havana experience that I’m glad we got to experience, and it’s all because I used Yelp to do a search for “Cuban jazz.”